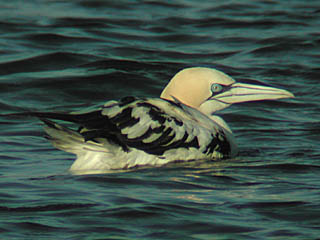 On Friday evening on 2nd July 2004 I was enjoying dinner at friends in Caversham. At 21.43 my phone rang but being in the middle of dinner I ignored it. However, it rang again at 21.45 and then again at 22.10 and 22.12. Clearly somebody wanted to talk to me! It was either bad news, somebody phoning me drunk or it was news of a rarity. I checked my phone to find several missed calls from Andy Horscroft and Derek Barker. It had to be a rarity!

I phoned Andy and was devastated to hear that there was a Gannet at Dinton Pastures (tho perhaps not as devasated as Fraser, who was in Cornwall!). It was apparently sickly so was therefore likely to be dead by the morning. Apparently I did look a little "twitchy" but soon got over it and carried on drinking. However, I was hatching a cunning plan...

By the time we left at about 11.45 I had borrowed a torch from our guests and persuaded my girlfriend (who was driving) to make a detour to Dinton. We arrived at the Sailing Club car park at about 00.15 and walked down to the shoreline. There was a full moon projecting a band of light across the lake. If the bird swam into it then there would be a good chance of seeing it. I checked the shoreline, half expecting to find a corpse when I noticed a white blob about six feet from the shore by the sluice.

I walked round to the sluice and shined my torch onto the white blob. Much to my surprise it was the Gannet with its head under its wing. It was bobbing up and down and could have been dead. However, it immediately lifted its head up and looked at me before making a short flight low over the water towards the jetty. It looked surprisingly healthy but I didn't want to disturb it any more so we left.

At 5.55 the following morning, much to my girlfriends delight, Derek phoned me to say it was still there and still alive. I decided to go and have another look and get some photos. Brian Bennett and Derek were there when I arrived. We watched the bird for two hours as it made repeated attempts to leave. It walked up to the shore on a couple of occasions when it was seen to be bearing a metal ring.

Although it seemed fairly healthy and clearly wanted to leave it presumably didn't have enough energy to make a prolonged flight. Its condition deteriorated until it was eventually captured and taken to St. Tiggywinkles Wildlife Hospital in Aylesbury at about midday. Sadly the bird died in care over night.

The bird was in third-summer plumage. It's not clear when it was found or by whom but the pager message wasn't broadcast until about 21:30. It was the 20th record for Berkshire but the first to be twitchable since an adult bird at Theale GP in April 1981.

Confused by this article's headline? Read this.

Update: 8th July. The post mortem revealed no signs of disease or injury. However, there was no food or food remains in the stomach or intestines so cause of death appears to be starvation. Leeches were found in its eyes which is indicative of it sitting around for a long time on fresh water. It was also covered in lice.

Update: 13th July. Results have come back from the BTO ringing office. The bird was ringed as a pulli (i.e. in the nest) on 26th June 2002 on Great Saltee Island, County Wexford, Ireland.