Laughing Gull, a first for Berkshire 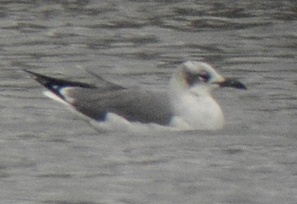 On the 2nd December 2005 I had a appointment in Reading with two shops. As I live in Bristol my best way is along the M4. As I was approaching junction 11 I noticed a large flock of gulls on what look like a gravel pit. I made a mental note to check them on the way home and carried on. After my appointments I had enough time to find where the best place to view them from was, but as I was looking through them I saw that there was a much bigger flock sat on a flat muddy field which I now know was the Green Park Estate.

So after checking the gulls on the pit I decided to check the large flock. Finding it hard to view them I found a small drive in with a metal gate down near the entrance to the tip. As I check through I noticed a certain adult Caspian Gull with a pure white head, beady black eye and greyish pink legs sat in amongst the larger gulls. It was a long way off so I drove back towards the M4 bridge.

There was another pull in, on the left hand side of the road. I parked up and walked back along the road and found a gap in the trees. There were thousands of mainly large gulls sat only yards away! I tried to get up on the bank off the road as it was a bit dangerous. As I did this the whole flock shot up in the air! No chance of seeing that again I thought.

Then as I looked with my naked eye I could see what I immediately recognized as a LAUGHING GULL! still on the ground not 50 yards away!! I lifted my bins up, it was, it was, unbelievable! What made it even more amazing was that it was the only bird out of about 1,000 that stayed put! After confirming it was an adult and checking all the major features to eliminate Franklin's. It was time to run for the car and get the camera. But as is always the case the bird had finally flown off, probably to pre-roost as it was getting close to dark and the weather was fowl.

After releasing the news, I and another local birdwatcher kept checking the gulls around the tip but there was no sign. Luckily the bird was relocated on the Saturday morning on the same spot and at the time of writing was still present in the general area.

I hope all the Berkshire birders got to see this lovely bird. I know Gulls are not everybodies cup of tea, but when you look at even a Black-headed Gull closely they are brilliant creatures!

Size: As the bird was alone at the time it was hard to get an exact size comparison but I estimated it to be in between Lesser Black-backed and Black-headed Gull more closer to a Common Gull in size.

General Plumage: The most obvious was its dark grey wings similar to Lesser black-backed in colour. Its undertail coverts, flanks, belly, throat and breast were all clean white, it also had a white chevron on the edge of the secondaries.

Head Pattern: White eye crescents above and below the eye, also a obvious dark grey/black smudge on the ear coverts area. The rest of the head was white.

Bill: Almost drooping visual appearance, looked mainly black but had hints of dark red towards the end of the bill.

Visual Stance: The bird looked visually low to the ground when sat down, not upright stance like on Black-headed Gull for example.