The bird was obviously a diving duck superficially similar to Tufted Duck, of which there were about 100 present, but the overall colour of the bird was noticeable paler, more sandy brown than the females making it easy to pick it out from the flock. It spent most of the time asleep but occasionally raised its head to preen. In doing so it ?rolled?, showing its legs to be un-ringed. Although it never flew it did flap its wings and there was no sign of feather damage as a result of being pinioned. It also dived on two occasions. I watched it at a range of about 150 yards between 15:05 and 16:30 through x10 binoculars and x20 telescope. I phoned the news into Birdnet shortly after 3pm and then phoned Brian Bennett. He was unable to come and have a look but confirmed the features from the Collins Guide. I phoned several other local birders but Mike McCarthy was the only person able to get out of work. He arrived at about 15:45 (x10 binoculars and x25 telescope) and was the only other person to see the bird.

Sexed as a female due to brown plumage of head and mantle. Aged as a first-winter due to dark eye, indistinct pale sub-terminal band on bill, lack of white ?tear line? off white eye ring and buff fringe to loral patch.

Upper parts: Mantle, rump and tail all brown. Wings brown with a pale grey wing bar across the secondaries and primaries.

Head shape and bill pattern are the two features considered to vary in hybrids. There was nothing untoward about the bill pattern, showing typical markings of a first winter bird. The head was peaked at the rear of the crown - as expected - but did not show any signs of a slight tuft.

I am 100% certain of my identification. This description and the accompanying sketch have been taken from field notes. 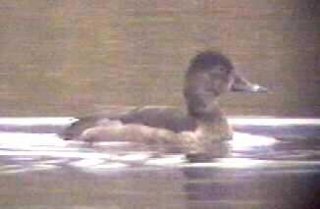 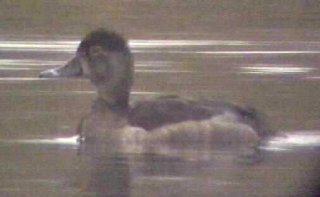