Whiskered Tern, a first for Berkshire 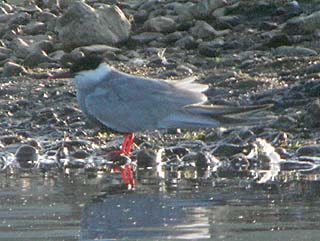 At 15:45 on Friday 20th May BirdGuides reported an adult summer Whiskered Tern at Tundry Pond in Hampshire. It remained there until 20:05 when it flew off high north-east. It was then relocated at Fleet Pond at 20:25 where it stayed until 21:06 when it flew off north "possibly to roost at Everlsey GPs".

Two enterprising birders were at Moor Green Lakes (Eversley GP) the following morning. Bruce Archer arrived at 04:35. John Clark's car was already there but there was no sign of the man himself. After about fifteen minutes Bruce located the Whiskered Tern, appropriately on Tern Island. He watched it flying about for ten minutes before it apparently departed south-east. However, it hadn't left as John - who had been sat in the hide - was still watching the bird commuting between the north and south lakes.

The news was phoned out at about 5:30 to Derek Barker (who was predictably at Swinley Forest) and to myself (predictably I was still in bed!). In a state of panic and much to the delight of my girlfriend I stumbled out of bed (putting the news on my website using my mobile phone as I went) and was soon on route to Moor Green.

Much to my relief the bird was still present when I arrived just after 6:00. I rattled off a few record shots in the dim light before walking further down the track to join Chris Heard. Derek, Bruce and John joined us from the hide. Brian Bennett arrived just in time to see the bird fly off purposefully north at 06:14.

A few disappointed birders arrived as we were leaving. Brian and I decided to go to Dinton Pastures which being due north was a likely place for the bird to end up at. We had only just pulled into the car park at 7:12 when Bruce phoned to tell me that Ian Brown had relocated the bird on Horseshoe Lake.

However, it left before any birders could get there and by 7:43 was back at Fleet Pond and by 12:30 it was back at Tundry Pond. It remained there until 17:29 when it flew off east. By 17:55 it was back at Moor Green Lakes where it remained until dark. It was still present at 8:30 the following morning but had gone by 9:00.

There have been several records of Whiskered Tern in 2005:

Whiskered Tern was on the Berkshire List courtesy of one at Sutton Courtenay from 2nd to 6th May 1970 but it was lost to Oxfordshire as a result of boundary changes.

Update: 28th May. Remarkably, the bird reappeared at Moor Green Lakes on the afternoon of 27th May!